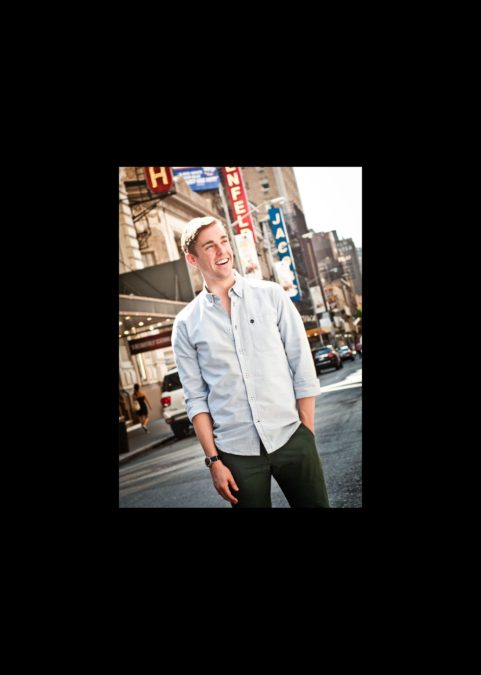 Broadway Buzz: The Book of Mormon Star Nic Rouleau Reveals the Curse of the Standby and Goes Gaga Over Kelli O’Hara

Current Role: A Broadway debut as Mormon missionary Elder Kevin Price, “the smartest, best, most deserving Elder” in the blockbuster musical The Book of Mormon.

Standby Me: Rouleau is the first actor to assume the role of Elder Price after the role’s creator, Tony nominee Andrew Rannells, left the production on June 10. “Obviously, there was a lot of pressure because so many people love Andrew and Josh [Gad],” Rouleau notes. “I love them, too; they're definitely some big shoes to fill.” On the upside, the NYU grad, who joined the company 11 months ago as Rannells’ standby, is enjoying having the role as his own. “I had already done the show 43 times before I started full-time, so I had figured out what ‘my’ show was, but there definitely was a subtle change knowing that now it’s mine," he says. "As a standby, you always deal with the curse of the [Playbill paper] insert: For the first 15 to 20 minutes of the show, you feel like you have to prove something to the audience ’cause they know you’re not the ‘real’ person. It was very nice to walk on to the stage and know that there’s no insert in the program tonight—this is my role.”

Tony Prank Calls: As the new face of The Book of Mormon, Rouleau took center stage in the biggest arena possible: the opening number of the 66th annual Tony Awards, leading his new company in Mormon’s opening number, “Hello.” As he explains, “I only found out about doing the Tonys on Monday of that week. I got a call from our producers, and honestly, I thought that it was a joke. I feel bad for the receptionist who was trying to connect me, because I thought it was a Mormon cast member playing a joke on me.” Soon, however, he was on the line with Scott Rudin and Anne Garefino, “They were like, ‘So, how would you like to perform at the Tony Awards on Sunday night?’ And I could not breathe,” he says earnestly. “I was freaking out. I was like, ‘Of course, of course!’” Who did Rouleau share the news with first? “I was in New Jersey to teach a master class to high school kids, and I was 30 seconds from starting when I got the call,” he recounts. “I had to spill! I told them right at the beginning [of the class], ‘I have secret and you can’t tell anyone…’”

Inner Fanboy: Rouleau caught the stage bug at age eight after appearing as a Lost Boy in a youth theater production of Peter Pan. He followed his dreams across country to NYU and immersed himself in theatergoing, a habit that continues to this day. “I devoted April as the month of theater, and I saw a Wednesday matinee every week for five weeks,” he says, taking advantage of Mormon's weekend matinee schedule. “I’ve always been a fan, and now to be a part of it and know the people I’m going to see is just surreal. I go see Steve Kazee in Once and it’s like, ‘Wait, I’ve met him.’ My 10-year-old self is going crazy!” Asked which Broadway star he admires most, Rouleau quickly names Nice Work If You Can Get It’s Kelli O’Hara. “I saw her in Light in the Piazza seven times,” he says. “She is my absolute number one favorite performer on Broadway. I met her briefly once, but I don’t think she’d remember. She did a concert at Cafe Carlyle while she was pregnant and on leave from South Pacific and I went and saw her in that. I have a bootleg recording of her concert and I listen to it before almost every show [laughs]. I need to meet her somehow!”