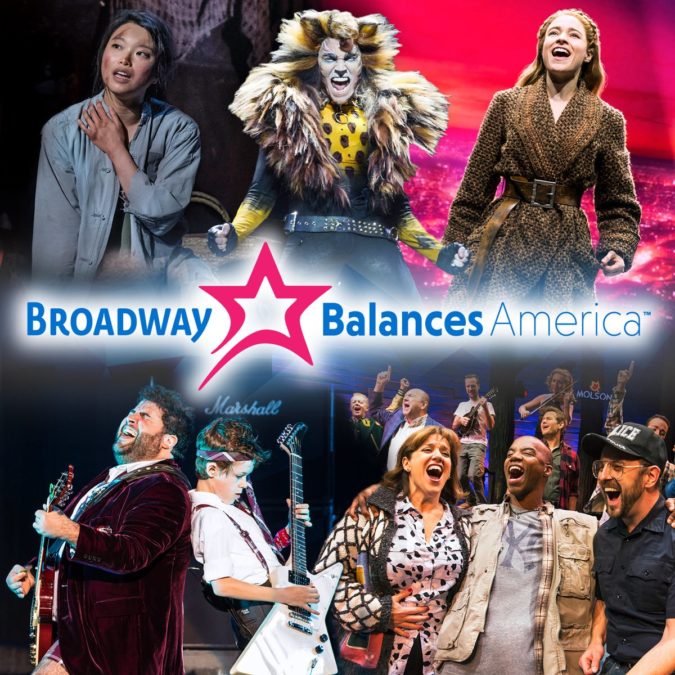 The Balancing Act, the award-winning morning show on the Lifetime Channel, is excited to announce that it has begun shooting the fifth season of the popular series, Broadway Balances America, sponsored by Broadway Across America. This five-part miniseries will take viewers behind the scenes of some of the most beloved Broadway musicals touring the country, including Anastasia, School of Rock, Come From Away, Miss Saigon and Cats. Broadway Balances America will launch on September 24.

“This partnership has yielded incredibly compelling behind-the-scenes content for television audiences, and has provided vital exposure for our touring productions,” said Lauren Reid, COO, The John Gore Organization. “This year’s slate of shows is going to make for some particularly exciting programming, with broad appeal across just about every demographic.”

A Telly Award-winning series, Broadway Balances America provides behind-the-scenes access and interviews highlighting shows featured on Broadway Across America’s 2018-2019 Broadway series nationwide. The host, Amber Milt, will have the opportunity to meet with the casts, crews and creative teams for an in-depth look at what it’s like to bring these shows to life on the road.

“We’re once again excited to provide our viewers a backstage pass and introduce them to the talented teams behind these incredible Broadway shows,” said Jeanne Kelly, Supervising Producer for The Balancing Act. “Soon audiences across America will experience all the music and magic for themselves as the shows head to their local community.”

On the first segment, Broadway Balances America goes on an epic adventure as host Amber Milt takes us inside the romantic new musical Anastasia. Hear from Lila Coogan, who makes her national tour debut as Anya, and costume designer Linda Cho as we learn how the exquisitely designed costumes and sweeping score transport audiences from the twilight of the Russian Empire to the euphoria of Paris in the 1920s.

On the next segment, viewers will gets an all-access look at life as a pint-sized musical prodigy in Andrew Lloyd Webber’s School of Rock. Meet talented rockers Ava Briglia, Layla Capers and Montgomery Lamb as they welcome Milt into the band and share what it’s like to balance being in a Broadway show with being a kid.

Andrew Lloyd Webber said, “School of Rock always resonated with me, because it is a story of how music changes these kids’ lives. My most passionate belief is in the power of music in education. Music cuts across all creeds and political views. This exciting opportunity to introduce television audiences to our School of Rock bandmembers in such an in-depth way will undoubtedly ignite passions in young viewers from coast to coast. I think we need a lot more of that.”

The series continues as Broadway Balances America revisits the remarkable true story of September 11, 2001, and the days that followed in Gander, Newfoundland, through the lens of award-winning musical Come From Away. Learn how creators Irene Sankoff and David Hein compiled 16,000 stories from this five-day period and ended up with an uplifting 100-minute musical featuring an ensemble of 12 actors.

During the fourth segment, Broadway Balances America will celebrate one of Broadway’s longest-running shows as it tours across the country with Andrew Lloyd Webber’s new production of Cats. Milt revisits the record-breaking musical spectacular and transforms into a Jellicle cat with the help of the production team.

In the fifth and final segment, viewers will meet the women bringing Miss Saigon to life. Get to know leading lady Emily Bautista, who plays the iconic role of Kim, and actresses Stacie Bono and Jackie Nguyen, as they prepare to tour the country and show incredible strength on stage and off. Broadway Balances America gets a glimpse inside the rehearsal process of this legendary musical that changed Broadway forever and continues to resonate with audiences today.

The air dates for the fifth season Broadway Balances America will be: