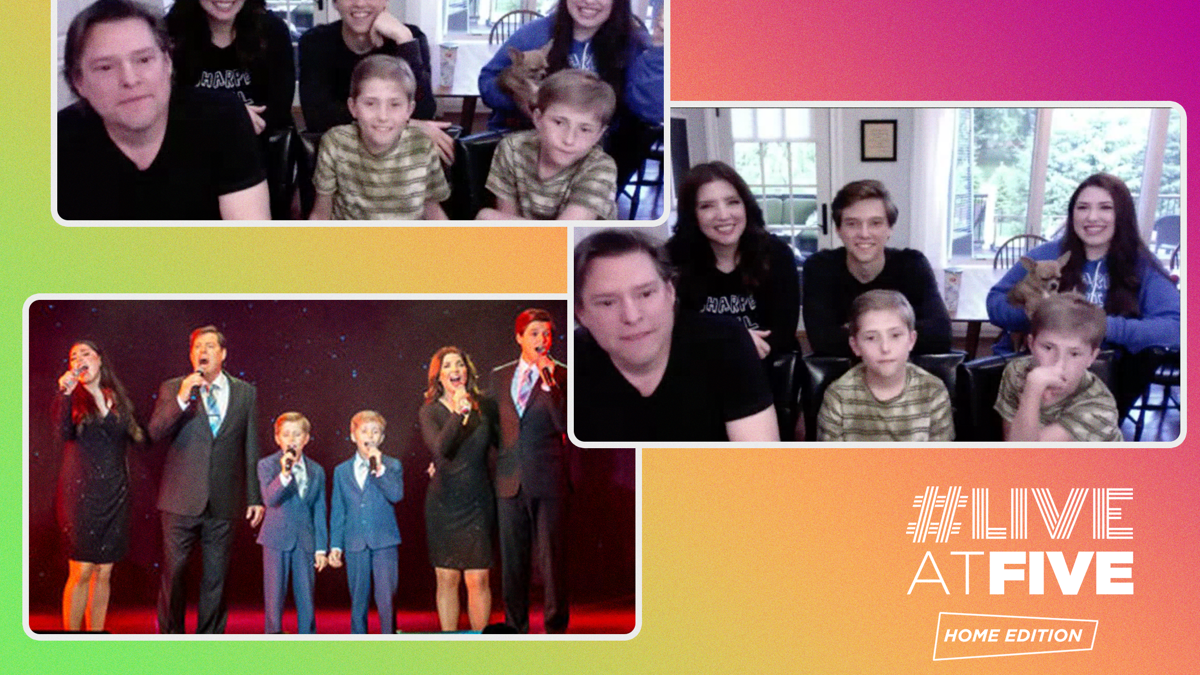 If you’re on the popular short-form video-sharing network TikTok, you’ve probably heard of the Sharpe Family Singers. With over 2.5 million followers and 41 million likes, the singing family of six—plus their adorable pup Chewy—has been wowing viewers with their covers, collabs and challenges. Ron, Barbra, Samantha, Logan and twins Aidan and Connor chatted with Paul Wontorek on Broadway.com’s #LiveatFive: Home Edition to talk about the Les Misérables romance that started it all and more.

Ron and Barbra Sharpe are both talented performers and producers, and their story began at the barricades. “I had been playing Marius for a couple of years in Les Miz and then Barbra joined as Cosette,” Ron recalled. “One day during the wedding scene, when everyone was running around us and she was in a $50,000 gown, she kissed me for real; the rest is history. After the kiss, I had to finish the scene and talk to Thenardier while she just had to smile and look pretty.”

Now with four children and a pup, the couple has been keeping the music alive by performing cabarets and concerts all across the country. What they never expected was to find fame through one-minute videos. “We had seen Frozen 2 ,and there was a scene in it that had a mother and daughter. I said, ‘Mom, we could recreate that,'” Samantha said. “That was the first viral video that really took off. It was months after we posted it, so we had no idea it was going to happen. It’s just kind of gone on from there.” Ron, who also appeared on Broadway in The Scarlet Pimpernel, The Civil War, Les Misérables and more, never thought about gaining an audience from something other than being on stage. “The crazy thing to think about is that I was in Les Misérables for 10 years and probably three million people saw me on stage,” he said. “You do one TikTok and all of a sudden 48 million people saw it in two days. Why have I been spending 25 years on stage when I should have been doing TikTok forever?”

While Ron and Barbra also have found success producing Broadway’s A Tale of Two Cities and A Catered Affair, it takes the whole family to create the perfect viral clip. “Sometimes we have ideas planned weeks in advance, but other times we’re like, ‘We need to make a TikTok right now,'” Barbra said. “Quarantine actually helped because we didn’t have anywhere to go, and we could just churn out TikToks. We look at what’s trending but also start with what we enjoy. We like Disney and we like Broadway, so we just did what we wanted to do. Once those started getting traction, we looked into what other people wanted to hear. Now we do it all. Everyone is involved in making it happen—it’s a lot of fun and a lot of work.”

What’s next for the family? They have their eyes on the stage and screen. “I thought I would go and audition for Broadway and that would be it,” Samantha said. “I never thought TikTok would be the thing but now everything is changing. I still want Broadway, but this awesome. We’ll go back out on the road when it’s safe to perform, and it will be great. A lot of exciting things are in the works.”

Hear the story of their first viral video and more in the full episode below!